WIENER NEUSTADT, AUSTRIA, June 1st 2021 – ENPULSION, the market leader in small satellite propulsion, and QOSMOSYS, a New Space company developing Zeus, a new family of spacecraft for inner and outer space missions, today announced that QOSMOSYS had selected ENPULSION as the preferred supplier for propulsion solutions throughout the Zeus range.

“Our decision came after a rigorous selection process”, said the co-founder and CEO of QOSMOSYS François Dubrulle. “ENPULSION offers a wide range of solutions which complement very well our Zeus range and the mission applications we have planned it for. These solutions provide what we consider to be the best specific impulse and overall performance in their class. Finally, as we are aiming to provide our customers with a secure and stable supply chain, ENPULSION’s experience in mass production of space-proven thrusters manufactured under the highest quality standards is a very important factor.”

The two companies, along with NuSpace, a major spacecraft engineering company based in Singapore, will work together on the integration of propulsion in future missions of QOSMOSYS customers aiming to provide the best solution in each particular case. QOSMOSYS plans to launch its first satellite with propulsion latest by June 2023.

The CEO of ENPULSION Dr. Alexander Reissner commented: “We are excited to support QOSMOSYS in achieving its goals of developing advanced spacecraft for its customers. We believe that our state-of-the-art thrusters and proven FEEP technology will significantly contribute for the optimum performance of these spacecraft. We will be also thrilled to see some of our products – for example the ENPULSION MICRO R3 – orbiting and landing on the Moon in the near future as planned by QOSMOSYS.” 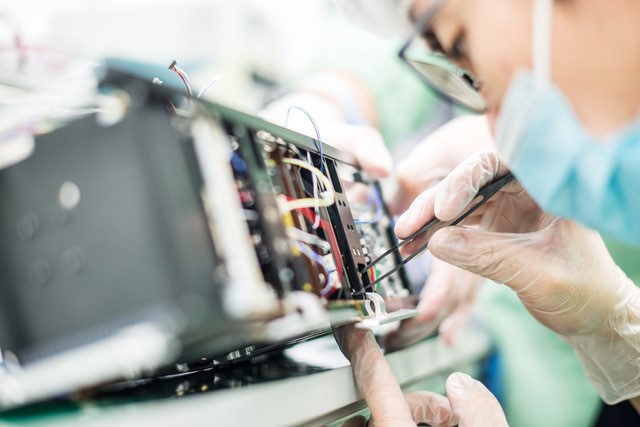 About ENPULSION
ENPULSION is the world’s leading manufacturer of electric propulsion systems for nano- and microsatellites. The company is based in Wiener Neustadt, Austria, and has a business development office in the USA. Its products are based on the company’s proprietary Field-Emission Electric Propulsion (FEEP) technology, behind which are more than 30 years of research and development work in cooperation with the European Space Agency (ESA) and the Research Facility FOTEC. In its own semi-automated production facility ENPULSION manufactures the ENPULSION MICRO and the ENPULSION NANO Thruster (formerly IFM NANO) families – the only compact, scalable, and modular electric propulsion systems worldwide. The ENPULSION NANO Thruster became the first European electric propulsion thruster to fly on a constellation of satellites. Currently, there are more than 60 ENPULSION thrusters in space with more than 200 delivered to customers. The company is ISO 9001:2015 quality certified for the development, testing, serial production, and distribution of space propulsion systems

About QOSMOSYS
Qosmosys aims to connect every citizen of the world with the vastness of space. For Qosmosys, the outer space is no longer reserved for a select few. With its innovative Zeus family of spacecraft, space becomes a new playground for individuals and corporations to bring their dreams to fruition. Qosmosys is a Singapore-based venture. https://www.qosmosys.com

You can find out more about which cookies we are using or switch them off in settings.

Would you like to receive additional information? Then please fill in this form and we will get back to you with more details.

This website uses cookies so that we can provide you with the best user experience possible. Cookie information is stored in your browser and performs functions such as recognising you when you return to our website and helping our team to understand which sections of the website you find most interesting and useful.

Strictly Necessary Cookie should be enabled at all times so that we can save your preferences for cookie settings.

If you disable this cookie, we will not be able to save your preferences. This means that every time you visit this website you will need to enable or disable cookies again.

This website uses Google Analytics to collect anonymous information such as the number of visitors to the site, and the most popular pages.

Please enable Strictly Necessary Cookies first so that we can save your preferences!